How is Costa Rica related to the honey processing and why did they export coffee anonymously at 1830s?

When Costa Rica was going to declare independence from Spain in 1821, the government distributed coffee beans to anyone who wished to cultivate them. The aim was to promote coffee production. At that time there were about 7,000 coffee bushes in the country. In 1831, the government announced that anyone who produced coffee in a particular area for 5 years could then claim ownership of the area.

Costa Rica’s first coffee export was a small amount of green coffee in 1820 to neighbouring Panama. In 1832, more coffee was exported to England, but in order to reach the island, it was transported through Chile. There, however, it was labeled as Chilean coffee from Valparaiso. Costa Rican coffee was officially exported as such to England in 1843, where it was received very warmly and marked the beginning of a tradition.

For almost 50 years, from 1846 to 1890, coffee was the only export commodity in the Central American country. To this day, this is the country’s largest export. Costa Rica is also known for its bananas and pineapples. An interesting fact is that thanks to the income from coffee, the National Theater was built, as well as the first public libraries in the country and the University of Santo Thomas.

4. There is a variety of coffee processing methods

In 1830, wet processing was introduced in Costa Rica. By 1905, about 200 water mills had been built in the country. Gradually, the quality of wet-processed coffees grew, and as a result, they started claiming higher prices. In the past, most farmers, especially small ones, relied on these wet mills not only to process but also to sell their coffee. Now, of course, other methods are used in the country, including anaerobic processing. In it, in a tightly closed tank, coffee cherries ferment as if grapes turning into wine. This process imparts taste characteristics that would not otherwise be formed in any other process.

In order to improve the quality of coffee and increase its sales, farmers in Costa Rica began experimenting with varieties, cultivation and processing. It was there that they discovered a method that combines dry and wet processing. They called it honey. It is actually a semi-dry process. Different degrees of dry fermentation are used in Costa Rica today. Bear in mind that even a minimal time difference in fermentation can change coffee’s outlook and flavor. Therefore, the terms they use depending on the time for fermentation are: white coffee, yellow coffee, red coffee, black coffee.

Since the declaration of independence of Costa Rica, the government encouraged coffee production. In 1933, it established the Institute for the Protection of Coffee. Its purpose was to protect small coffee producers from being exploited by resellers. In 1948, the institute was renamed the Coffee Workshop (Oficina del cafe). It gradually became the Instuto del Café de Costa Rica / ICAFE. It still exists today and is engaged in experimental coffee plantations for research purposes and in the promotion of Costa Rican coffee around the world.

In the 1980s, Costa Rica was still unfamiliar with specialty coffee. Until 2000, the country exported mainly large coffee brands, a product of large processing stations or big farms. In recent years though, there has been a boom in microprocessing stations. As a result, the specialty coffee segment began to develop and Costa Rican coffee became easier to track and more transparent.

There are more and more farmers who are investing in smaller processing machines and who process their coffee on their farms. This way, they have more control over the whole process – from the cherry to the bags of green coffee that buyers from all over the world wish to acquire. Various types of processing techniques have gradually appeared in the country, and as a result, various coffee styles.

It is a safe bet to say that the farmers in this small Central American country are among the first to really care about the quality of the coffee they offer. The many and varied microclimates in the different country’s coffee regions also contribute to this.

Currently, Costa Rica is famous for specialty coffee microlots, which can be easily traced to a specific plot on a specific farm. 90 percent of Costa Rica’s about 50,000 coffee producers work on farms smaller than 5 hectares, and this is also a precondition for micro and nanolot quality coffee.

The prestigious Cup of Excellence specialty coffee competition has been held in Costa Rica since 2007. This resulted in gradual imposition and development of standards for the production of increasingly high-quality coffee. In 2015 and 2017, Jordan Dabov was a member of the international jury of COE in Costa Rica. After his second participation, DABOV bought the Dona Ileana coffee at the online auction, which won 11th place in the competition. 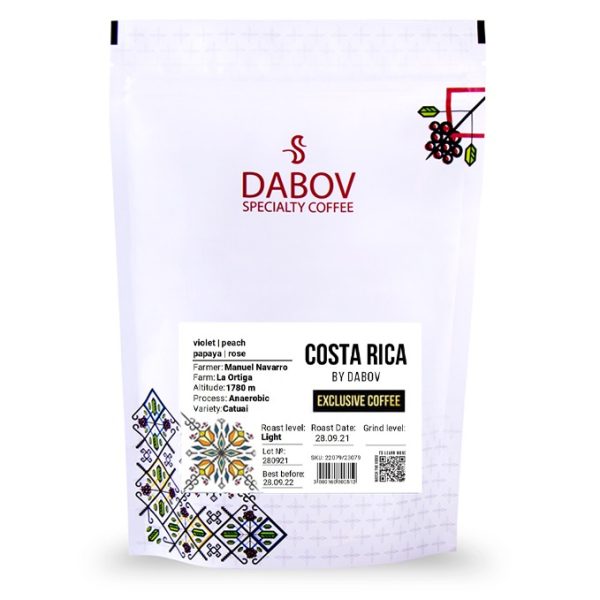